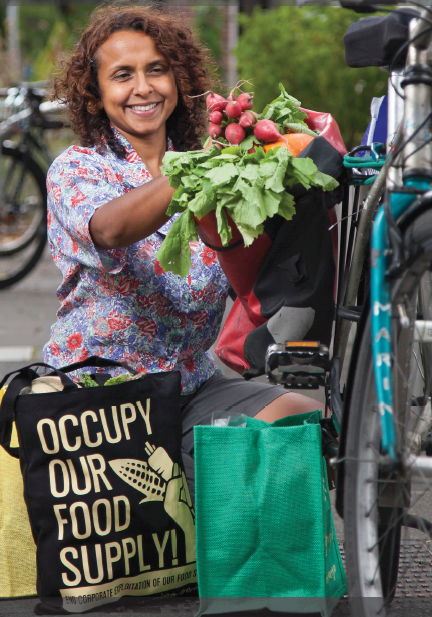 I’m from London, but am an internationalist at heart, studying international politics, then living in Central America. Not long after, I conducted PhD research in Mexico and the US that critiqued the power of crop biotech companies. At this time, I also worked for Ethical Consumer, a multi-stakeholder co-operative in Manchester which reports on companies’ ethics.

To escape from a computer screen, I spent 10 years establishing community food growing spaces and gaining urban farming experience in Greater Manchester, so my role at Stir To Action links well to this. Prior to this role, I co-authored a book for Rethinking Economics about the need to diversify, decolonise, and democratise the teaching and practice of economics to help reform economic systems. Concurrently I studied a course about sustainable and socially just food systems to gain a better understanding about how to develop better systems to those we currently have globally.

What’s your role at Stir to Action?

I’m a Project Manager for Oldham’s Affordable, Healthy Food Initiatives. So I work with members of the Oldham Food Partnership and its stakeholders to develop and manage a programme of activities and interventions to build local capacity in Oldham’s food system. The programme aims to establish new approaches to developing a sustainable food supply for Oldham residents, with the involvement of the local community sector being a key input to this.

What other initiatives are you involved in?

I’m a trustee of Growing Together Levenshulme, a social and therapeutic food growing project on an allotmentment site in south Manchester, specifically aimed at providing a safe and welcoming space for destitute asylum seekers and refugees. It’s been a privilege to have this role due to the amazing volunteers and staff that facilitate it, and the courageous people who participate in the project.

I’m also a part of my allotment site’s campaign to stop the development of unaffordable high rise blocks of flats in a low-rise neighbourhood alongside our site’s perimeter in Old Trafford, Manchester. We’re not against new builds, but want to see more affordable, locally appropriate and eco-friendly housing developed. Also, with a big UK urban population, allotments are much needed green and biodiverse spaces to be protected, which benefit plotholders and local communities socially and ecologically.

What keeps you up at night?

Well, apart from wondering if progressive policies to truly develop economic systems change, equity for all, and climate justice will ever be instilled on these shores and beyond (!), not that much, unless I’ve had some very dark chocolate too late in the day.

Though if I decide to do some dancing at home as a bit of exercise after dinner, I’m buzzed for a while after a mix of tunes ranging from Aretha’s ‘Rocksteady’, Chaka Khan’s ‘I Feel For You’, The Prodigy’s ‘Hyperspeed’, and various tunes by the Beastie Boys!

One thing you are going to change? [in the world]

I don’t believe any one person can change something in the world, but many people working towards a similar outcome can, because that then draws upon different skills and understandings to motivate others to also do something to make a difference.Though in an ideal world, collectively making this difference would revolve around the first part of my previous answer - that and making cycling as a mode of transport safe for everyone, everywhere!