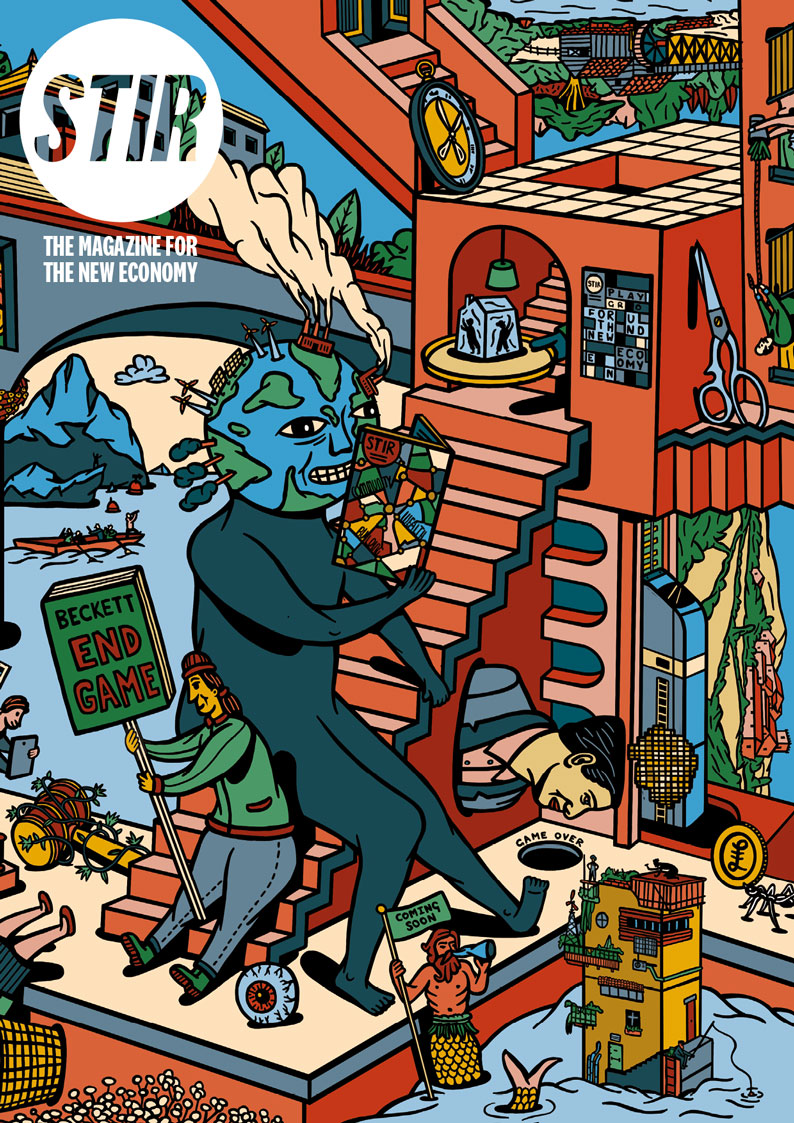 We've just published our Winter 2023 issue, and you can order your copy here.

This year marks the 10th anniversary of STIR magazine – first published in print in 2013. For our 40th issue of STIR, we have commissioned a special wraparound cover from illustrator Phil Wrigglesworth (philwrigglesworth.com). In the issue, explore an annotated version to find reference to all 39 of our past covers!

The Advocacy Implosion? The role of popular membership in civic life – Jonny Gordon-Farleigh

What changes have contributed to the disappearance of mass involvement in democratic life? Why has civic life become over-dependent on hired experts? Could the displacement of mass membership bodies by specialist advocacy groups be partly responsible for new forms of political resentment? And, ultimately, is our current “civic health” a cause for optimism or worry?

Can HR ever see humans as more than resources? – Liam Barrington-Bush, RadHR.org

Is there a way to share the ways we want to work together, that can help us live our radical values – in all their complexities – rather than undermine them? Liam, who co-founded RadHr, a new open source library of radical HR and operations policies and processes, explores the thorny issue.

As a new federation for UK worker co-operatives, workers.coop, continues to be developed, John and Kiri travelled to Philadelphia for the US Federation of Worker Cooperatives conference. This conversation emerged from discussions begun at the conference, focusing on the challenges and tensions associated with the use of paid and unpaid labour when building a movement based on solidarity and mutuality.

Can we design the future? Civic economics in austerity Britain – Matt Thompson and Colin Lorne

Radical transformation is promised through elegantly elaborated theories of change, branded as a model, and packaged seductively, sold as a lucrative commodity in a growing marketplace of place-based policy ideas. In catching the imaginations of cash-strapped commissioners in innovative partnerships with flush foundations – beyond the reach of democratic decision-making – such models concentrate scarce resources intensively on a handful of places, leaning into the competitive winner-takes-all logic of neoliberalism.

Democracy in crisis: Maxwell Jeffery in conversation with David Runciman – In this issue we’re digging into the STIR archives to share a previously unpublished interview with the academic and podcaster David Runciman, author of How Democracy Ends.

The Shadow Economy: A review of Dirty Work: Essential Jobs and the Hidden Toll of Inequality in America by Eyal Press – Fred Warren

Fred Warren reviews Dirty Work, which exposes a society that outsources not just physically dirty jobs (those many of us would rather not do) but the morally dirty jobs (those many of us would like to pretend don’t exist) to the poorest and most vulnerable people. Eyal reveals a society not just stratified along lines of wealth and health but also on moral and spiritual lines; where the ability to ‘do good’ is increasingly premised on a set of social and economic advantages.

Excerpt: ‘From Financial Fictions to Mythotechnesis’ from Futures and Fictions (Repeater Books) – by Simon O’Sullivan

In what ways could we imagine a world different from the one in which we currently live? This is the question addressed by the essays and conversations in Futures and Fictions – with discussions around decolonization, new Afro- and other futurisms, post-capitalism, science fiction, and new kinds of social movements – which explore possibilities for a different “political imaginary”. In STIR Issue 40, we have an excerpt from one of the book’s co-editors, Simon O’Sullivan.

‍Over the past three years, the Heritage Trust Network (HTN) have been working with Locality to deliver Open High Streets, a series of events funded as part of the Architectural Heritage Fund’s (AHF) Transforming Places through Heritage programme, supporting high street regeneration led by local groups with the aim of bringing historic buildings back into use and, specifically, into community ownership. Grace Crabtree spoke to some of the grantees and panellists to find out more.

The launch of Scotland’s National Strategy for Economic Transformation (NSET) in the spring of 2022 set out an ambitious vision for Scotland's co-operative development, growing the number of social enterprises, employee-owned businesses and co-operatives in order to support regional regeneration and the wealth of local communities.

In Reaction: How can economic democracy respond to the cost of living crisis? With contributions from Bonnie Hewson, Sion Whellens, Sarah Longlands, and Jonathan Nunn.