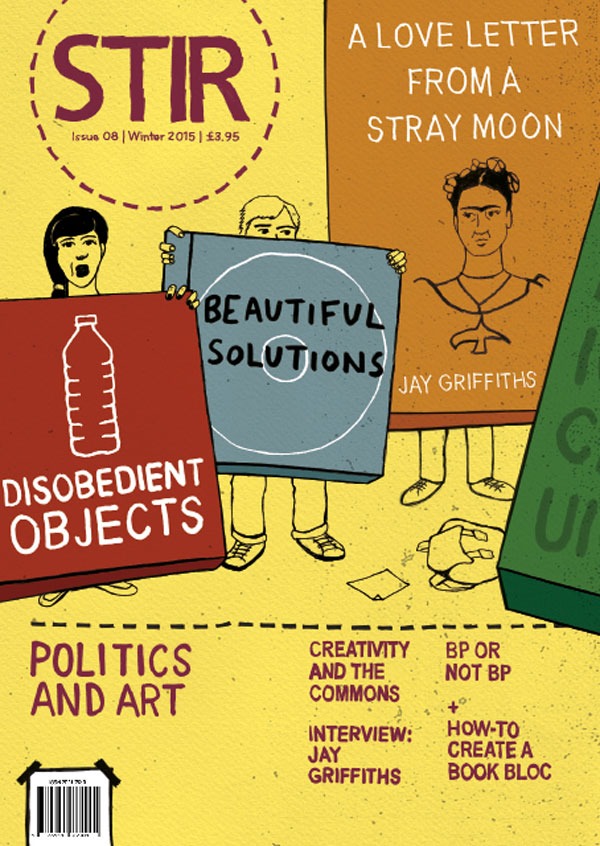 "Creative protest was central to the success of the campaign to stop the third runway at Heathrow and my abiding memory is the audacious flash mob staged inside the airport. But I’m also old enough to remember when so much campaigning was so very different. Campaigns against roads, airports and nuclear plants tended to be dominated by men in suits – middle-class, educated, at ease with public speaking – making carefully crafted arguments."

"Guerrilla Translation was founded in spring of 2013 but the idea came to us earlier. Stacco Troncoso and I are the co-founders and also a couple. We met online in 2009 while I was living in New York and, shortly after meeting in person, I moved to Spain so we could be together – so, clearly, we can speak firsthand about the internet’s tremendous power to connect people."

Creativity and the Commons — Max Haiven

"French realist painter Gustave Courbet is, at first glance, the quintessential modern artistic persona: arrogant, iconoclastic, moody, brilliant and individualistic. He was also an anarchist who, in 1871, served as the short-lived Paris Commune’s de facto Minister of Culture, developing programs that empowered artists and opened museums and galleries to the public. It is towards figures like Courbet that our imaginations are trained to gravitate when we hear the word creativity."

"Our task is not an easy one. As Fredric Jameson and many others have pointed out, it’s easier to imagine the end of the world than the end of capitalism. But with time running out to avert catastrophic climate change and no sign that neoliberalism is up to the task, this is precisely the choice with which we are confronted: the end of capitalism or the end of the world as we know it. The question is can we dream, build and fight our way to a more humane and ecologically sound system? "

“I think what’s really difficult about [writing about politics] it is that if you’re an artist, and a good artist, it seems to me that you’ll almost inevitably have a hinterland of politics in your work. I don’t know how it’s possible to be oblivious to what happens in the world, or to be without a sense of some kind of political responsibility. And at the same time, when issues are approached head on, like climate change and the like, the result is often really, really poor and ineffective art.”

"Design from below is the theme of the V&A’s current exhibition Disobedient Objects, taking viewers on a journey of objects used in protest and produced by grassroots social movements during the last 35 years. By its very nature, protest sets itself at odds with dominant ideologies; protests are enacted out of the countercultures of their time and, in this show, political art and design objects are, “afforded a different form of contemplation by being put into a wider history.”

Playing for Time: Making Art as if the World Mattered — Lucy Neal

"When I was young I spent a lot of time on stage acting. Later, directing a theatre festival professionally, I immersed myself in producing shows but spent fewer hours on the stage itself. Since those early days I’ve had a recurring dream that may be familiar to others. I am about to go on stage, but I cannot find the script. From the sounds and actions of people around me, I know I’m due on stage any minute. Each time I lay my hands on a script to get an idea of what part I’m playing, someone takes it off me…"

BP or Not BP: Reclaiming the Bard — Chris Garrard

‘What country, friends, is this – where the words of our most prized poet can be bought to beautify a patron so unnatural as BP?’

The Artist is Dead, Long Live the Hacker! — Szczepan Orlowski

"Art culture attempted to participate in many of the attempts to overthrow capitalism in the 20th century. Mostly associated with avant-garde movements such as Dada and the Surrealists, these groups wanted to break from the traditional perception of art by creating together and outside conventional spaces. As Dada poet and performance artist Tristan Tzara declared, “The artist no longer paints, he creates directly.”

"Herbert Read was a 20th-century British poet, novelist, art critic and writer, and what would now be considered as an anarcho-syndicalist (he had anarchist ideas with a sprinkling of communism). In the art world he befriended and championed a group of young contemporary artists who were to become central to British art historical narratives, including Henry Moore, Barbara Hepworth and Ben Nicholson."

"The history of cartography is replete with violence. The simple act of penning a line on a map – think of the Pakistan-India border – can create political antagonisms over which wars are fought. The drawing of maps can be used as a tool in the expropriation of land and resources by the State or corporations, depriving people of access to common resources. Yet there is an alternative movement, one whose past and present incarnations have much to offer activist struggles."

"UKIP and Dracula are lurid products of the same national imagination. Our own. Horatio Morpurgo reads the current scare stories through one bad novel and way too many movie versions. It’s time, he argues, that we called the Count to account."

"Acting as a bridge between the realm of administration and imagination, art as public intervention can provoke us to rethink the ways we inhabit our cities on a physical, social and psychological level. To dream, even at the smallest scale, of how we may recreate the spaces that we want around us."