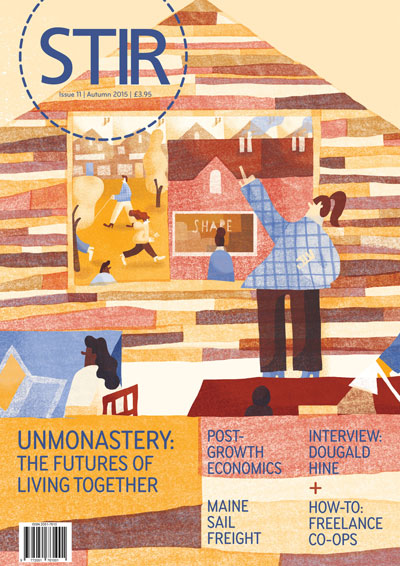 “Ecosocialists argue that climate change is a product of capitalism. We need to keep fossil fuels in the ground, promote reduced energy consumption and renewables but, above all, to stop climate chaos we need to transform our socio-economic system. The American writer and activist Joel Kovel outlined the ecosocialist case against capitalism in his book The Enemy of Nature.”

“Imagine that instead of moving housing when the size of your family evolves, it has become possible to modify the size of the space and number of rooms in your home. Your apartment could grow or shrink according to your neighborhood throughout the family life cycle? Is this not an original way of looking at housing as a commons?"

“Each year the number of abandoned villages grows in Spain, Greece and Portugal. 11 million empty homes in Europe could house the homeless twice over. Drastically falling fertility rates threaten the economic near-future of most European countries. Meanwhile, Europe may soon awake to an influx of refugees risking their lives to escape impossible living conditions in their fragile and battered home countries.”

“On 8th June 2009, 36 cinemas around the UK showed, for one night only, the documentary film The End of the Line, which revealed that if overfishing continued at the current rate, there would be no fish in the world’s oceans by the middle of this century. Just over 4500 people saw the film that night. At that time, about 20% of the UK population were aware of of a sustainable fisheries policy. Within 20 months of the films release nearly 60% of the UK population were aware of the issue.”

“On August 27th 2015, Maine Sail Freight, a project of the young farmers advocacy organization, Greenhorns, sailed a schooner full of Maine-grown cargo down to Boston. We’re sailing a schooner—not just because it’s ecological when compared to super-tankers spewing as many pollutants in an hour as 350,000 automobiles, but also because we’d like trade to operate with an awareness of its regional history, its foundation in technology of the colonial era. We need to remind our young farmers to be bold, and imagine a less colonial future.”

“Four months ago, the British electorate decisively rejected Ed Miliband’s Labour Party. The result was devastating—Labour secured its lowest number of parliamentary seats since 1987, when it was midway through nearly two decades spent in opposition to the Conservatives. This humiliating whitewash presented definitive proof that Labour had failed to offer a convincing alternative to the Tory agenda, instead espousing a sort of ‘austerity lite’ interspersed with a miscellany of incoherent policy proposals. It is no exaggeration to say that the Party is now facing a critical identity crisis.”

“The shoots of a new progress story are emerging. We can build a future of shared global prosperity and justice, but only if we abandon the dogma of growthism and prepare for a post-growth society. The exhausted logic of growth-based developmentalism insists that ‘a rising tide lifts all boats’. It is a generally unquestioned assumption that we need to grow the economy to lift the poor out of poverty, on the global as well as national scale.”

“If you read the Manifesto, we were proposing to create a literary journal. The framing of this was a set of very stark statements and questions about the nature of the mess the world is in. I’m not sure anyone would pretend that a literary journal is a way that you’re going to fix or solve everything, or offers the future of the environmental movement.”

“Robin Hood Coop (RHC) is a community-led data-driven Hedge Fund-like organisation run by academics, hackers, investment consultants and artists – to name a few. It was founded in 2012 in the aftermath of the 2007/08 financial crisis and set out on the mission to find new ways of expanding and protecting commons. So far, it has made roughly €150,000 for members and projects. The coop is the first iteration in an ongoing attempt to answer the common refrain of; “What to do?”

“A different kind of graduation ceremony took place this summer in Frome, a small Somerset Market Town that prides itself for its independent politics, small businesses and community initiatives. On a rainy evening in Frome’s new Roundhouse Garden, 70 diverse members from the local community found cover underneath a wooden shelter, sat within the public garden of small fruit tree saplings and other edible plants: mint, raspberries, wine, hops, rhubarb and cobnuts. They were there to celebrate the 12 young adults who had just completed Edventure, an 8-month training programme in community enterprise.”

“For many people longing for real alternatives to fake democracy and corporate oligarchy, the new politics arising in Spain over the last few years has been a wellspring of inspiration. In 2011, when the Indignados, the ‘outraged’, occupied the Puerta del Sol, Madrid, and other plazas across Spain, we watched and cheered, mostly because we wanted to see ourselves in them – regular people of every age, every gender, standing up, being heard, practising democracy, perhaps for the first time and clumsily, but they were participating in their own destiny in a new way.”

“Landed is an exploration of land ownership through contemporary art. StoreyG2 is a small art organisation based in Lancaster,  North West England. We are running a project researching land ownership and its effects on people’s lives. Landed (Freeman’s Wood) is centred on a plot of land where the interests of a local community have collided with those of global capital.”

“Billy Bragg has a talking point he likes to hit in his recent stage banter: that his purpose in performing political songs is to entertain the frustrated many so we can feel like we’re not alone, preventing us from despairing in our political activities. It’s a sobering and probably true idea: that the efficacy of political music is relatively circumscribed. In other words, the form, structure and work of music remain distinct from politics: while songs and shows are effective places to recognize fellow travelers and reenergize one’s commitments, the real business of politics lies outside venue walls and past the last chorus, in people’s struggles to organize their communities against injustice.”

“How many market towns across the UK have been redeveloped and homogenised into shopping complexes of national chain stores?  NEF’s 2010 report said that 4 out of 10 towns are “clone towns”, with a further 23% very close to becoming one. Local firms that retain their spend within the local economy are still being displaced.”