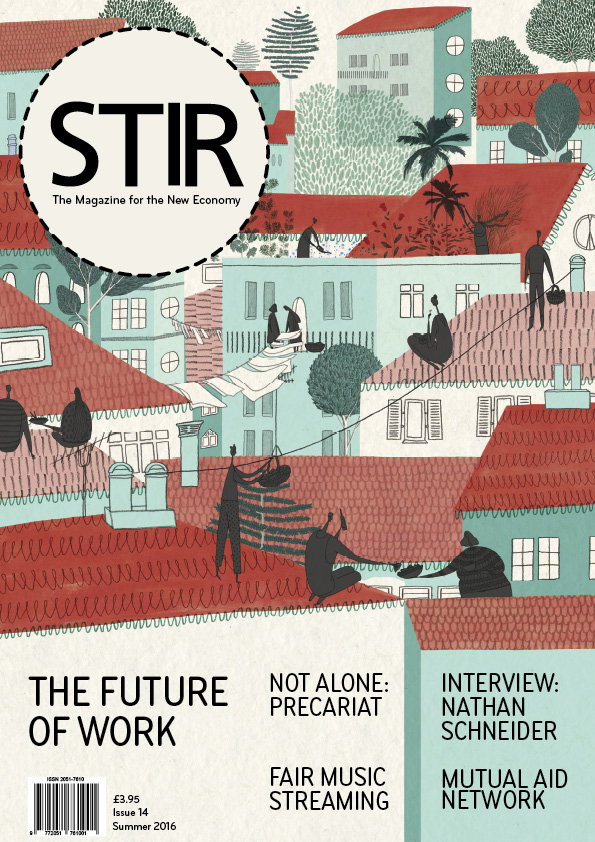 The Future of Work

"The piecemeal ‘Gig Economy’ – no guaranteed work or income – has become ubiquitous in Europe since the financial crisis in 2007/8. Ruthless austerity policies and welfare reforms have driven the expansion of a wide diversity of atypical and increasingly unprotected forms of work. For many, a permanent state of social economic uncertainty and a lack of rights is the new normal."

"Every generation experiences paid and unpaid work differently as the narratives, superstitions and exploitative powers of dominant elites change. In Biblical times work was about glory and ‘making the world’ but in Ancient Greece, labour was seen as degrading and best left to slaves. For Aristotle, leisure is a necessity, both for growth in goodness and for the pursuit of political activities’."

"Not simply working the land as a labour, but working as part of a broader picture of a life that tends toward living more fully and deeply, a life where there is room for creativity, contribution and genuine fulfilment. A life as part of a wider ecosystem."

"The sharing economy is another casualty of co-optation. The sharing economy can transform our cities, mutualize community resources, open-up opportunities for skill sharing and non-monetised resource exchange. To be fair, it is doing that. But the idea has been co-oped by multi-billion dollar Silicon Valley platforms like AirBnB, Taskrabbit and Uber, which are more accurately a way of commoditising personal assets, skills and resources."

"What if you could have the freedom of a freelancer with the financial security you used to get from decades-long loyalty to your 9-to-5 job? What if you could choose to stay home with your kids or parents or friends or lovers if and when you needed or wanted to, could get help with the things you find difficult or unpleasant, could find talented people to co-create the projects you want to see in your home or neighbourhood or watershed?

"As the millennium came to an end, an incredibly obsessive question began to form in my mind. “What’s next for the music industry?” We had numerous music industry clients and we were tasked with building (or fixing) many of their first websites, from superstar artists like Clint Black, LeAnn Rimes, Richie Sambora and a whole host of undiscovered talent. No matter whether they were a platinum-selling artist or total unknown, we were constantly being asked this fundamental question about the future of digital distribution."

"Internet culture needs to learn from co-ops – in particular, the importance of shared ownership over the engines of the economy and their profits. But offline co-ops can learn a lot from the experience of peer-production online. Free-and-open-source software projects have demonstrated that incredibly complex, coordinated activity can happen among teams spread all over the world. Some tech companies have developed interesting governance structures that offer alternatives to both static hierarchies and consensus-based horizontalism."

Co-operating with the Council — Amy Hall

"With more equal pay structures, higher levels of productivity and better resilience in tough economic times, it’s not surprising that the UK’s local authorities are waking up to the benefits that workers’ co-operatives can bring. But how councils implement their support to workers’ co-operatives in policy and practice is variable and there are questions over whether this recent enthusiasm comes from a desire to cut costs, rather than promote a better quality of life."

What if: Co-ops UK had £70 million a year? — Josef Davies Coates

"Co-ops in the UK turnover £34 billion a year but rely on £1 million over 3 years from the Co-operative Bank to fund co-op development and support.  This needs to change and change fast if we're to navigate the perfect storm of climate, energy and economic uncertainty and accelerate the transition to a fair economy that thrives within planetary boundaries. Justice demands it. Our shared future depends on it.  How might we do it?"

Do Not Feed the Monster! — Marisol Sandoval

"Capitalism hails itself as a haven of freedom and democracy. And yet we spend a significant proportion of our everyday lives in situations that are neither self-determined nor democratic: work. For the majority of people engaging in waged work, it is not a choice but a necessity."

"Rather than occupy just one bank building and put it to work for the community, as valuable as that is in making a public statement, Duran’s ideas have been rather larger and more daring: hack currency markets to create an entirely new financial system. Dedicating his life to activism in his early 20s, Duran’s increasing commitment to the Integral Revolution led him to eventually expropriate more than half a million Euros through various bank loans."