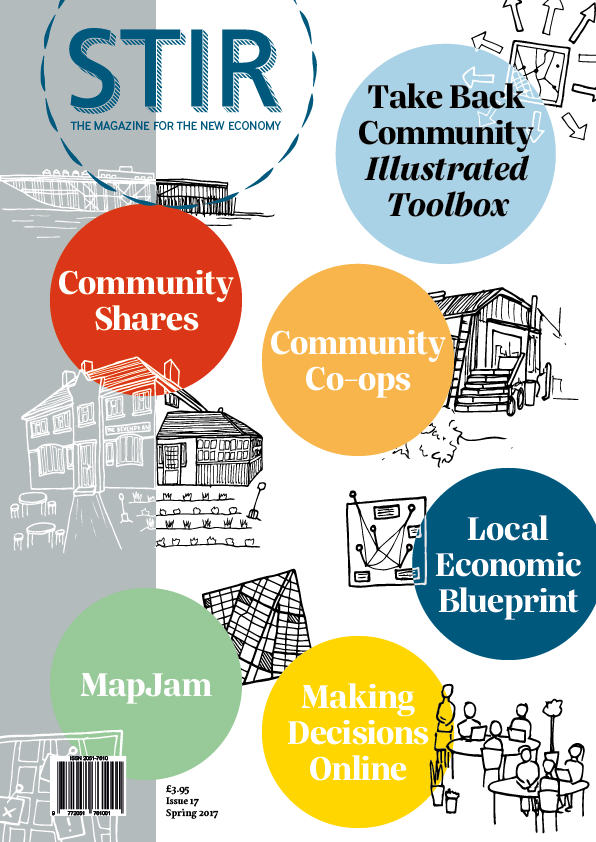 Get a copy of our Community Toolbox , featuring eight illustrated how-to guides on Community Engagement, Working Together, Legal Structures and Social Finance.

"The concept of Community Economic Development is still emerging from a range of activities already well-established across the fields of economic regeneration, community development and the social enterprise movement. There are other terms used in various contexts to describe similar processes or goals – ‘community wealth building’, for example, or “economic democracy”, “community development”, the “social and solidarity economy” and “economic localisation”.

How to Host a MapJam — Tom Llewellyn, Shareable

"MapJams bring community members together in cities around the world to connect the dots and map grassroots sharing projects, co-operatives, community resources, and the commons. A MapJam is an easy-to-organise event where a small, dedicated group of people get together for a few hours to create a digital public map of as many sharing services and initiatives as possible."

"The Economic Blueprint process aims to make the case for community-led economic localisation by developing an evidence base about the local economy and key resilience sectors, such as food production; identifying opportunities for more local provisioning; and estimating what they might be worth in terms of revenue, livelihoods (jobs), and well-being."

"At the peak of the Occupy movement in 2011, a group of activists in New Zealand experienced direct democracy for the first time. Sitting in circles at a General Assembly, making decisions collectively was a mind-blowing experience for the founders of Loomio. Along with feeling empowered, they also discovered that making decisions face to face, always in person was incredibly frustrating. From that the seed was sown to create an application to help move the personal, face to face meetings of the Occupy movement to an online platform accessible to everyone."

"As a sociologist for hire, my work was to explain why community groups tried the software but rarely come back. I visited dozens of community spaces, from meditation centres to pop-up events. I participated in activities and interviewed organisers and other visitors. But this only brought up more questions."

How to Set up a Community Co-op – Kat Darling

"Community co-operatives are businesses which trade primarily for the benefit of their community. Controlled by the community themselves, they have open and voluntary membership and, crucially, they encourage people to get involved – either by becoming a member, or by volunteering time or getting involved in another way."

"Community Economic Development is invaluable and hugely necessary in the era we find ourselves living in. Too much centralisation has led to people becoming the receivers of jobs and services, rather than being involved in creating solutions based on individual and specific place based needs."

How to Set up a Multi-Stakeholder Co-op — Alex Lawrie, Somerset Co-op Services

"Multistakeholder co-operatives have emerged in many countries around the world. In Italy and Canada, they are often referred to as ‘solidarity co-operatives’ in which the interests of different stakeholders are reconciled for the purpose of creating more inclusive and nurturing communities."

"Community Shares are part of a wider trend towards ‘disintermediation’ in finance, with enterprises able to source the capital they need from more than just banks, it's working well in this new environment not least because it pre-dates the era of the intermediaries."

"What makes somewhere a great place to live? How do we identify a great town or city?According to Ebenezer Howard, designer and founder of the Garden Cities movement, an ideal city should be a network of small, independent, self-sufficient city-states, connected to one another by railway."

How to Host a SOUP — Amy Kaherl, Detroit SOUP

"The SOUP is a microgranting dinner celebrating and supporting creative projects. For a donation of £5 attendees receive soup, bread and a vote, which they’ll cast on one of four projects who present at the event, ranging from art, urban agriculture, social justice, social enterprise, education, technology, and more."

"In response to this challenge, there have been many community innovations, such as the Community Co-op, primarily with support from the Plunkett Foundation. These models are viable and effective, with the Foundation’s research showing that “97% of the community owned village stores opened over the past 25 years are still open and trading today."

This illustrated toolbox was produced with artist Emma Charleston.