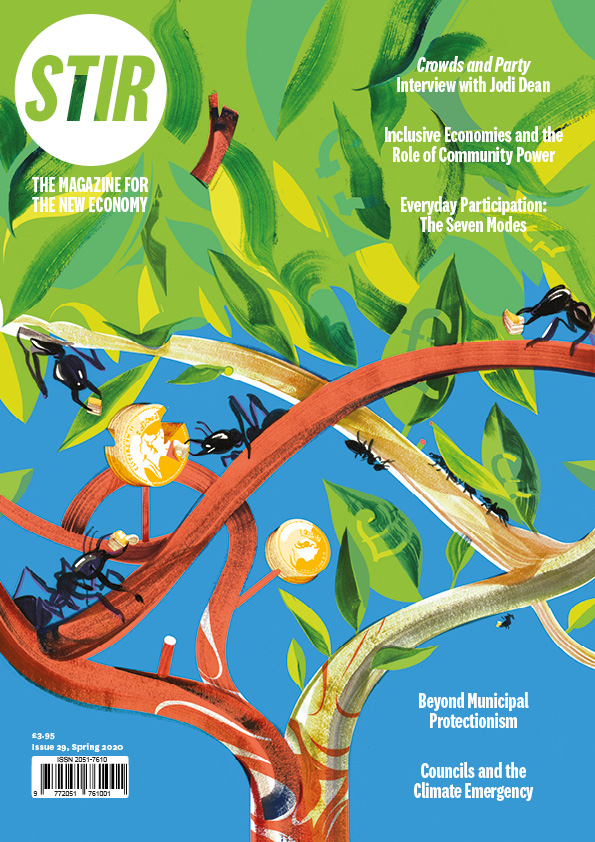 Pre-order our latest issue for a 25% discount below.

The Crisis and Beyond

Our new issue features immediate and post Covid-19 responses from UK activists, exploring how the communities already using mutual aid and co-operation can inform our approaches to this novel crisis.

“As councils we have not reached this decision to declare a climate emergency in isolation. We are all standing on the shoulders of decades of informed, passionate, and tireless campaigning. The climate emergency is not an issue we can own, and a declaration is not the end of the conversation.”

“Since 2010, children’s centres have seen a 62% cut in funding, leading to 548 closures and a further 722 nurseries reducing their range of services. However, the closure of Cherry Tree nursery is where the similarities to the wider decline in early years narrative ends. Instead of accepting the closure, the parents at Cherry Tree have come together to write a different kind of story for their local nursery."

Commons or Shares? The Problem with Worker Ownership — Sion Whellens

“The sale of US craft brewery New Belgium Brewing to a division of the Kirin Holdings Company by its worker owners has provoked an outbreak of soul-searching among people who believe employee ownership is central to a new, more equitable economy. It has also reignited old debates about the difference between common ownership worker co-operatives and shares-based models in the US, UK, and Canada.”

“Today’s radical policy tools are less crude than traditional tariff barriers and other forms of trade protection.  But they too aim at providing a developmental path in which local economies are at least partly protected from the icy winds of global competition: a form of actual protection rather than mere protectionism.”

“In our enthusiasm for ‘resident power’ have we dismantled a whole profession? More than ever now we need to understand the complex skill set needed to work in the messy unregulated spaces where the state has failed.”

Interview with Jodi Dean, author of Crowds and Party

“Crowds and Party was published five years after Occupy and I’m trying to argue for a way of seeing that disruption as a moment towards a resurgence of the party form. Though that’s not, strictly speaking, an empirical claim, it’s my agitational claim. I’m inviting people to look at it differently - that’s what makes it politics - where we can argue over the crowd event to try to make it open into some possibilities directed around a particular kind of politics.”

Inclusive Economies and the Role of Community Power — Neil McInroy

“Austerity and cost cutting pressures have eviscerated our public services. Any attempts to place their design and delivery in the hands of communities under these conditions will surely serve to deepen marketisation as they are forced to compete for scarce public resources. We should be wary of any slippery slope in which a struggling community sector delivers less with less, dressed up in the language of empowerment.”

“How do we start to see community-led housing as significant and meaningful? How can we present it in a way that changes the way that policy makers and others in the housing sector see the individual projects that exist or are emerging within the sector? One way is to understand that all types of community led housing initiatives are addressing the underlying issue of rent.”

by
Jodi Dean with Jonny Gordon-Farleigh
SEE ALL ARTICLES