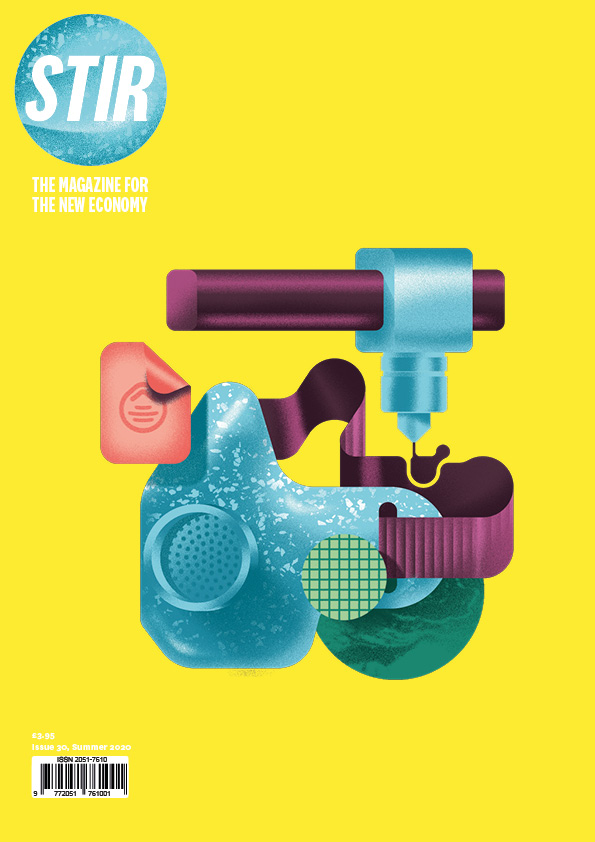 ‍“After first responders deal with the emergencies of this moment, we need some second responders to help emancipate us from an archaic worldview and ineffective institutions and infrastructures. We face huge temptations to revert to old ideological patterns of thought and politics, but the best way through the crisis is to re-imagine systems of provisioning and governance.”‍

‍Commoning our way through the Climate Crisis – Lucy Stone

‍“As lockdown is lifted, the analysis of failures gives way to the focus on rebuilding our society and finding a way to deal with the climate crisis. We supposedly must decide between a dependence on massive centralised state intervention, such as the Green New Deal, or the runaway techno-utopian beliefs of the private sector. But, if we know where to look, we can see that a new world is already emerging and it is not led by market or state.”‍

‍“A Black Swan is an event that comes as a surprise and has a major effect on many people’s lives. The First World War, the collapse of the Soviet Union, and 9/11 in the United States are all examples of previous Black Swan events. The philosopher Nassim Nicholas Taleb defines them as unpredictable and high-impact events. COVID-19 has been a Black Swan for most of us. The effects of both the virus and the lockdown have been quick, surprising, and far-ranging. But it has not been a Black Swan for everyone.”‍

“Positive frames of mind can be difficult to come by these days, but whereas the risk was ‘clone towns’ a decade ago, the collapse of so many retail businesses means this is now a fairly distant prospect. Instead of fatalism about the future, we must instead embrace the opportunity the crisis presents to shape town centres and high streets into something closer to social and civic centres.”

“The bounce-forward world will be threatened by economic failure, health challenges, climate crisis, inertia, racism, big men politics, and vested power. It will be hindered by a lack of access to capital to buy change – shift ownership, restore buildings, remake high streets – and a lack of revenue to pay people to make change. It could be helped by government policy on health, welfare, education, business, being influenced by the grassroots systems thinkers with their bifocal lenses.”

“In an attempt to hold the government to account, provide BAME groups with a platform to voice their concerns, and press the government for transformational change, The Ubele Initiative have launched the #WeNeedAnswers campaign. The campaign urges the government to launch an independent public inquiry into the conditions of disparity that exist for BAME groups.”

“I’ve observed and heard how councils across the UK have, in some places, embraced local groups realising that there is no choice in such an unprecedented situation. Other councils have led top-down approaches, leaving willing volunteers twiddling their thumbs while council workers struggle to coordinate enough volunteers that they ‘trust’ to do the official work. As we move out of lockdown, the landscape is different but the challenges are no less.”

“Almost every day Mayor Chokwe Antar Lumumba has put in place new programmes following scientific advice, such as recommendations from the Centre for Disease Control, and the governor just blocks it, or constrains it, or tries to challenge it to send mixed messages from the jump. Initially, Mississippi refused to lockdown, under the new governor who’d just been in office since February.”

Interview: Danny Dorling, Slowing Down: The End of the Great Acceleration‍

“1492 is probably the beginning of the age of accelerations, with ships coming back with silver from the Americas. There have only been 18 human generations between then and now (see page 195 of ‘Slowdown’). Many people have identified 1492 as a starting point, but in terms of population and everything else, the great acceleration is from 1800 onwards (around seven human generations ago). From the many things involved, it's probably British imperialism, more than anything else.”‍

“We need to conceptualise all of our health care budget as a health inequalities budget. An emphasis on wellness not illness, that spending on community organisations and life – free from defined targets so local people can define for themselves what’s important – is not a cost but a long-term investment.”‍‍

A debate between the Centre for Local Economic Strategies and the New Local Government Network about the role of community empowerment.

by
Kali Akuno with Jonny Gordon-Farleigh

Slowing Down: The End of the Great Acceleration

by
Danny Dorling with Jonny Gordon-Farleigh
SEE ALL ARTICLES