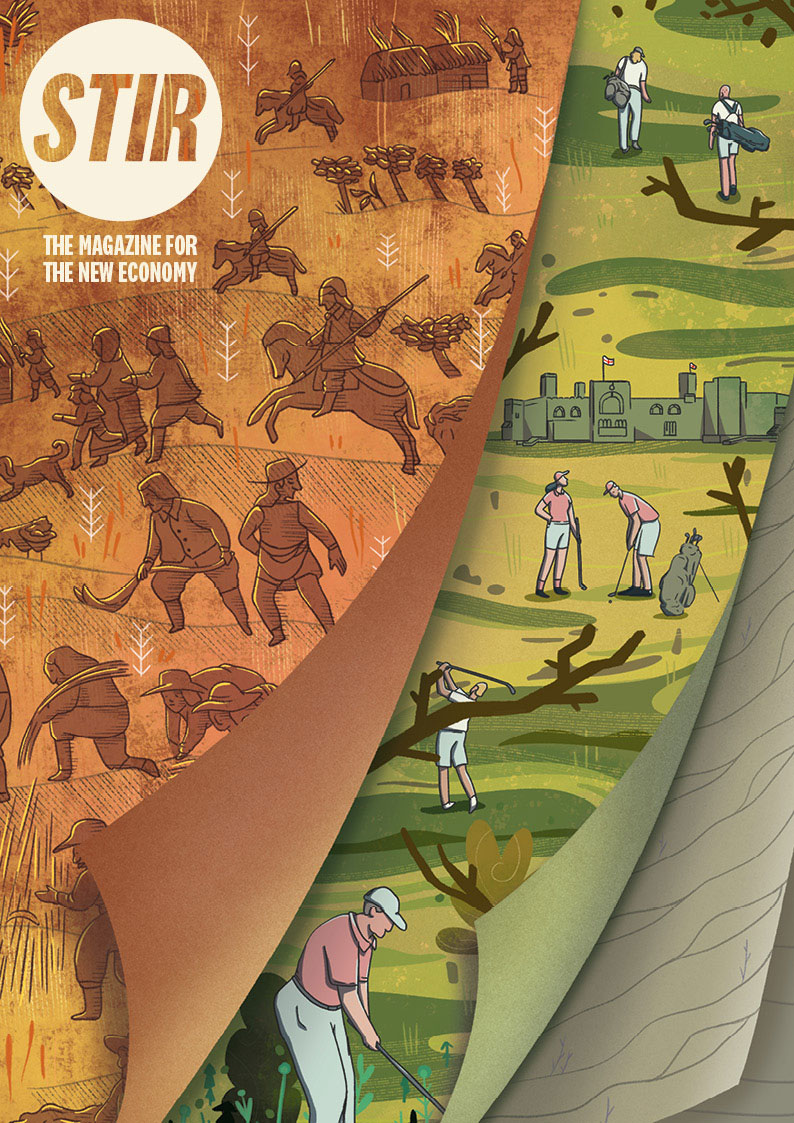 One crisis to the next? Stuart Hall and the politics of the conjuncture – Matthew Wilson

In the face of the constant crises of our time, from Austerity to Brexit to Covid, Matthew Wilson suggests learning from the cultural theorist Stuart Hall's ideas of 'conjunctures' and common sense, understanding political and cultural life as a complex web of social relations, shifting over time.

Public-Common Partnerships (PCPs) are a proposed approach to the common ownership and governance of assets and resources, proposing a role for public institutions in both de-risking and enabling processes of commoning. Frances Northrop speaks to Bert, Kai, and Kier to understand more about how PCPs fit into the wider movement for the democratic economy.

Imperialism and the Diggers – Rowan Powell

St George's Hill, Surrey, today a private gated community and golf course, has long been a prominent site of anti-imperial dispute and resistance against enclosure. Rowan Powell traces the lineage of this land, beginning with the seventeenth-century insurgency of the Diggers, a group of poor radical agrarian protesters, through global processes of colonial land dispossession and anti-imperial struggle.

Failure is an option – Kelly Bewers and Dan Woolley

What would it mean to foster a culture of transparency around failure? Rather than focusing on success stories alone, the authors propose a fundamental change to the grant-funding process, by sharing candid and practical ‘anti-case studies’ which normalise the sharing of failure as an inevitable and necessary stage of learning and development.

Why talk about art when we want a new economy? Four art lessons on four pages – Kathrin Böhm

How can art enter the world of economy and enterprise, and vice versa? With a focus on this recent Documenta art exhibition, which this year was organised around collective and co-operative economic principles of 'Lumbung', Kathrin Böhm proposes an interdisciplinary call to action, with art and the economy learning from one another.

Thomas Crabtree explores how current approaches to the Green New Deal could be more just, democratic, and effective by drawing on alternative economics models, moving away from over-extractive and top-down packages of legislation that tend to lead to “ethical blind spots”, and instead towards more open-ended, pluralist approaches.

Excerpt – No Such Thing as a Free Gift: The Gates Foundation and the Price of Philanthropy (Verso, 2015) – Linsey McGoey

We are entering an age when the ideals of social justice are dependent on the strained rectitude and questionable generosity of the mega-rich. In No Such Thing as a Free Gift, author and academic Linsey McGoey puts this new golden age of philanthropy under the microscope.

STIR editor Jonny Gordon-Farleigh talks to Linsey McGoey, author of No Such Thing as a Free Gift: The Gates Foundation and the Price of Philanthropy (Verso, 2015).

Playground for the New Economy – Festival photography by Pete Millson

Earlier in the summer, we held our annual Playground for the New Economy Festival at our Mid-Devon residential campus, Selgars Mill. Our festival photographer, Pete Millson, captured some great shots over three sunny days of panel discussions, workshops, sustainable food, and live music.

Failure is an option

by
Kelly Bewers and Dan Woolley

Imperialism and the Diggers

by
Linsey McGoey with Jonny Gordon-Farleigh
SEE ALL ARTICLES
By clicking “Accept All Cookies”, you agree to the storing of cookies on your device to enhance site navigation, analyze site usage, and assist in our marketing efforts. View our Privacy Policy for more information.
PreferencesDenyAccept