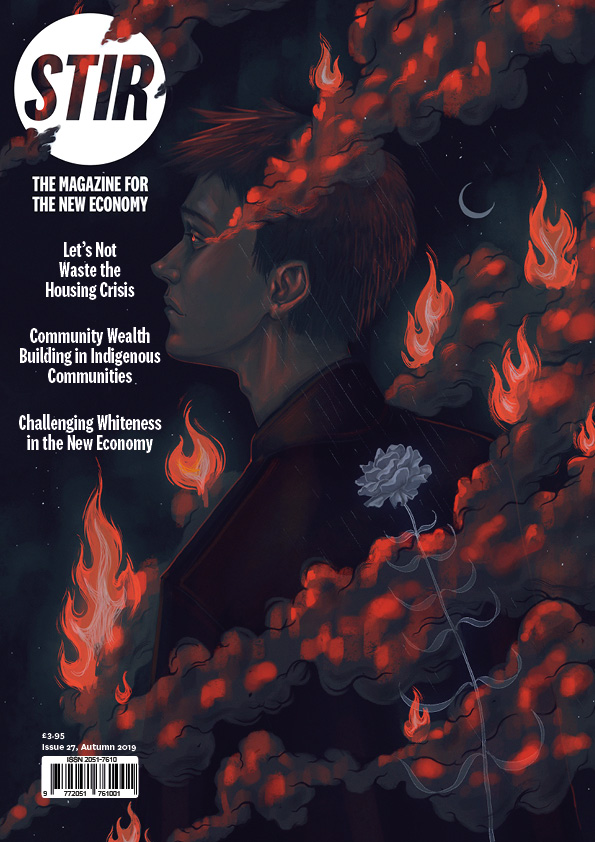 “If the construction industry is to exploit new digital technologies, it also needs to encourage disruptors into the market who have a different vision of a new economy. Potential for such disruptors is now emerging through the rapid growth of two independent trends: the expanding community-led housing sector and the emergence of new digital construction systems.”

Community Wealth Building from the Bottom Up — Sarah Mckinley

“Impatience is great as a tactic in the world of community power, but in terms of community leadership it can be problematic, because you can easily leave people behind. When I haven’t got the time to wait, I have a tendency to do all the work without giving colleagues the opportunity to get onboard, understand what I’m trying to achieve, and share the workload.”‍

Not Business as Usual: Challenging Whiteness in the New Economy — Stephanie Gamauf

‘If white-led organisations are really serious about inclusiveness in terms of race, they will have to think about black leadership and leadership of colour. I don't want to be the client or the beneficiary. I want to make decisions on what is being offered to me and my community’‍

“In 2018, the workers from The Ivy House pub in South London launched a wildcat strike, shutting down the pub for three days. The striking staff demanded the reinstatement, pending investigation, of four members of staff dismissed without due process, trade union recognition, and an end to zero-hour contracts. A year on, the action has opened up crucial conversations about the place of workers in community businesses.”‍

“The movement can also build on the growing dissatisfaction within the tech sector. London-based think tank Doteveryone found that more than a quarter of tech workers in the UK assisted to decisions related to technology they felt could have negative consequences on society. New organisations such as Zebras Unite and Co-Tech are also emerging, vouching for different financing and governance models for the industry.”‍

“My Implementation Group Minority Report recommends the size of the co-operative economy should be doubled on a local community basis without becoming more involved in commissioning, procurement, and market competition with the private sector for delivering public services.”‍

“Some football clubs are bucking the trend by putting sustainability at the heart of their operations, using football as a platform to advance social justice, or by embracing democratic ownership. These clubs are embracing their role as part of the shared “social infrastructure.”‍

Resilience: Changing the way we do change — Peter Lefort

“The benefit to resilience becoming a recent buzzword is that everyone recognises it as a ‘good thing.’ Nobody wants to be less resilient. But the more and more we become familiar with a thing without any deeper understanding of how to get it, the more like a fairytale it becomes. We don’t need to experience a shock in order to be resilient, but unfortunately there is often a pattern in which we think of resilience through its absence, broadly defined as burnout.”‍

Getting on with Local Authorities — Simon Parker and Mark Walton

“If you want to build a new economy it is becoming increasingly clear that you need local authorities on your side. For all their many flaws, councils are still our only institutions that focus on the quality of life in our places. The way they spend their diminishing resources – and the ways in which they can influence spending from other local bodies like the health services – are critical to the shape of the local economy.”‍

“In our new book Free, Fair and Alive: The Insurgent Power of the Commons, we outline some fundamental dimensions of property law that need to be re-thought if we are going to have legal regimes that actually recognize and support commons. We not only need to neutralise the pernicious imperialism of property rights in ordering society and ecosystems. We need to rethink our very premises about property.”

by
Les Huckfield
SEE ALL ARTICLES
By clicking “Accept All Cookies”, you agree to the storing of cookies on your device to enhance site navigation, analyze site usage, and assist in our marketing efforts. View our Privacy Policy for more information.
PreferencesDenyAccept